First of all, we recommend that you play the 2-player game “(1) Box Card Game ver 1: For First-Time Players” first and foremost. In this booklet, we will explain the rules in bite-sized pieces. These rules are for 2 players.

Story.
An old bookstore. There was one book on the shelf that caught my attention. I picked up the book and opened the page.

Choose one of the three witches of Fire, Wind, and Earth.

Each player must choose one of the witches and open the bag. Inside the bag, in addition to the witch’s card, there would be five cards. Those are your spilia material cards, i.e., the cards you have. The extra third witch is turned face down and mixed into the card pool. (The card pool will be explained later.)

Object of the game
You use a Spirea Material card to defeat a player who has chosen a different witch than the one you have chosen. The defeated player is sacrificed in a dark ritual, and the witch sealed on the card is brought back to life in this world.

The game is played four times, and the player who wins the fourth round wins the game. (types) will change.

Game Preparation
Please take a moment to check the components in this box first. (If any are missing, please contact the Spimatte Production Committee.)

(1) “In the Beginning” booklet → This booklet.
(2) Two instruction booklets 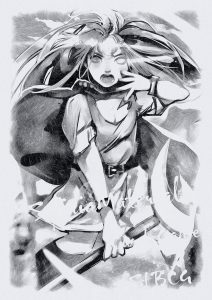 →I believe there are two other booklets in the packet apart from this one. These are the detailed rules for the entire spimatte. If you have any questions when playing, please read these instructions. 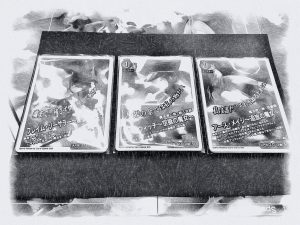 (4) 3 playboards → For each witch, there is a dedicated board to use.
→There are 2 bundles. Please mix them to make a bundle of cards. 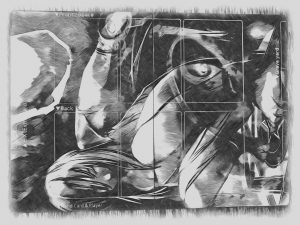 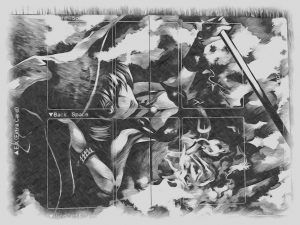 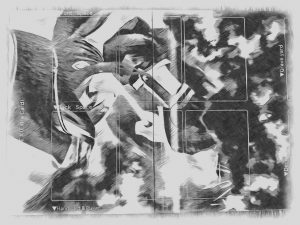 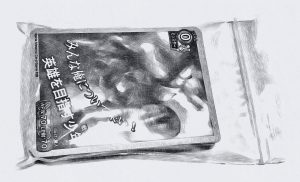 What is in this bag is called the card pool. It is used as a pile, face down. Each game, cards are added to the deck from this deck of cards. 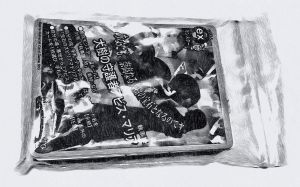 →This time, we’re playing (1) Box Card Game ver 1 “for first time players.”
Do not open it. It is used for intermediate level. When you open this bag, you will see
The rules for “Alchemy Summoning” will be added.

Once confirmed, set up the place as follows
You are now ready to go. 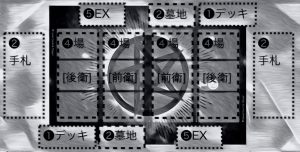 (1) Deck Place: This is where you place your deck. Decks are placed face down.
(2) Cards in your hand: When you draw a card from your deck, you hold it as a card in your hand so that your opponent cannot see it. You can play the cards in your hand.
(3) Graveyard: This is the place where cards that have been destroyed, buried, or discarded from your hand are placed. They are placed face up together.
(4) Field: This is the place where the cards you played are placed. It consists of 6 squares (2 vertical*3 horizontal), one for each player. Each square is basically occupied by one card face up. The 3 squares on the opponent’s side are called the vanguard, and the 3 squares on your side are called the rear guard.
(5) EX: EX is placed in this square, which consists of cards whose cost is “ex”, face down at the beginning of the game. Depending on the progress of the game, the cards may be placed face up or face down. (Cards with cost can also be placed.)

In the first round, witches are placed in a place called EX and cannot be used in the first round. This is because you are not recognized by the witch and she is still watching you to see how good you are. after the second round, you can put the witch’s card in your deck to fight with you. Draw one card from the card pool without showing it to your opponent. Including that, you both think you have 6 cards in your deck (the cards you have in your possession), so you make this your deck (called the deck in this game) and you are ready to go.

Start of the game 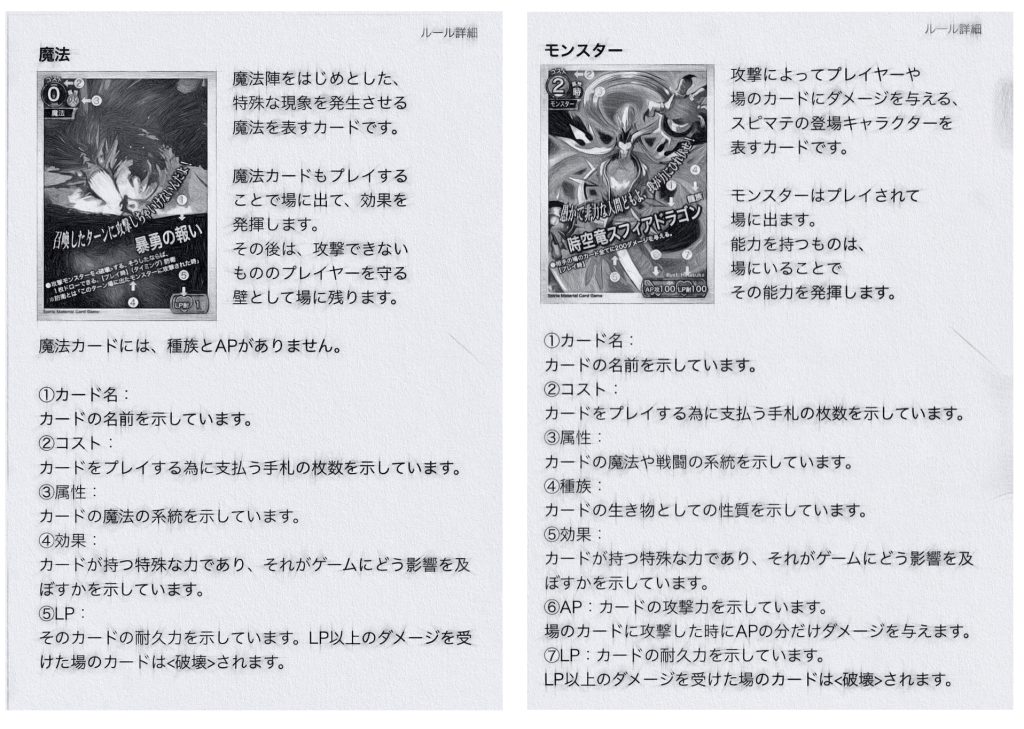 The instructions that follow are also detailed in the separate “Instructions” booklet, but in playing (1) Box Card Game ver 1 “For First-Time Players”, please read this booklet first, but also read the instructions if you are not sure after reading the booklet.

The following flow is the same for all of the first four rounds.

2. Each player can take a card of his or her choice from his or her deck without showing it to the other player.

3. Each player shuffles the remaining cards into the deck (face down) and draws two cards from the top of the deck. This confirms that you now have three cards in your hand.
The game starts. Thereafter, the first player to attack takes a turn, followed by the second player. Thereafter, the players take turns alternately, aiming for the victory condition.

If a player is attacked by a card with an attack power (AP) of 10 or more with no cards in the opponent’s hand or field, and it succeeds, the game is lost and settled.

1. Draw a card from the deck. On the first turn, there must always be 3 + 1 card to make 4 cards. If you cannot draw a card, continue without drawing. (You do not lose).

A: Play the monster in hand on the table. You can play a monster from your hand in this way only once per turn. Also, to play a monster in this way, you must discard the number of cards in your hand equal to the “Cost” written in the upper left corner of the card. The discarded cards are placed in a place called the graveyard. (Other than this method, for example, when a monster is put on the field by the effect of a card, there is no limitation on the cost of the hand or once per turn, as explained earlier.)

Also, if a card has an effect that says [at play], it can be used.

B-1: Play a magic card in your hand on the field. If the card has a “When played” effect, you can use it. (You can also just put it on the field as a wall with LP without using “When played”.)

C: If the card has an effect marked [Optional], you can use it. (Timing) can only be used at that timing. You can keep it as a wall on the field. (By the way, effects marked [Permanent] are applied from the moment the card enters the field.

The four rounds of the Box Card Game ver1 specific are the deciding factor.

After the first round is over, the next round is prepared for the next match. From here, depending on its win or loss, additional cards can be obtained from the “card pool”. Also, from the second round, you will put one “witch” from the EX into your deck. Together with the Witch, you will defeat the enemy.

After the first to third rounds, prepare for the next round in the following order.

The winning player selects the top 7 cards from the “Card Pool” and makes them his/her cards. Then, he/she returns 3 or more cards from his/her card pool to the card pool and shuffles them. (The player with one less card than the losing player is likely to be the second player in the game.)

The defeated player selects the top 4 cards from the “card pool” and returns them to the “card pool” from the cards he or she has 0 or more of, and shuffles them.
(One more card than the winning player, and he/she is likely to be ahead.)

Once this is done, proceed to the next round of the game. The game is played four times, and the player who wins the fourth round wins the game. (types) will be increased or decreased.

This is the end of the explanation of (1) Box Card Game ver1.

However, there are some words and rules that need to be explained in order to proceed with the game. There are other keywords, but only the important ones are explained here.
About Battles

In a battle, the turn player (the person whose turn it is now.) can attack with his or her monsters, once per monster, by determining the target of the attack.

Here is the flow

1: Designate one of your monsters

2: Designate a monster or player in the opponent’s field

3: The monster’s AP damage is unilaterally dealt to it.

The process is as follows.

The designation of 2: is determined by the following rules.

The field is divided into “vanguard” and “rear guard” categories.
If there is at least one card in the front three squares
The “rear guard” cannot be the target of an attack.

As long as there is at least one card on either side of the field (vanguard or rear guard), the “rear guard” cannot be the target of an attack.
A player cannot be designated as an attacker.

For 3:, the damage calculation is as follows.

If the player’s designation is a monster, the damage will be calculated by the monster’s AP.
It is unilaterally inflicted on it.

If the player is the other player, the player wins.
However, the opponent can discard a card from his or her hand to take his or her place.
The player can avoid defeat. (Discarded cards are placed in the graveyard.) 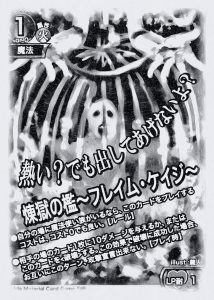 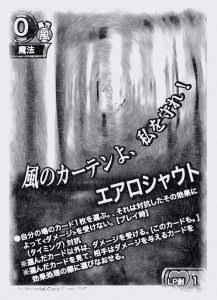 Once you are familiar with how to play, please visit the website below to review the rules. The differences from ① are that the card pool is increased, and that “the first five cards are completely free,” “the concept of alchemy summoning is introduced,” and “there is a second hand called EX,” but the rules themselves are not significantly different. If you get used to it, please play and see this one as well.

For more information on Alchemy Summoning, please refer to
Manual and here
Please read it.

As an ultimate goal, we hope you will enjoy (3) Standard ver 3 “for advanced players”. We will be holding regular official tournaments and other events to promote this rule, and we hope that you will participate with your own strongest deck and deepen exchanges with various people.

We hope that you will participate with your own unique and powerful deck and deepen your friendship with many people.

The game is also bundled with the following rules 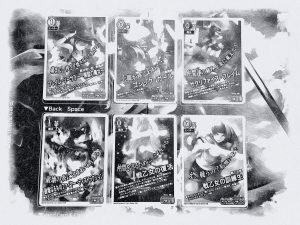 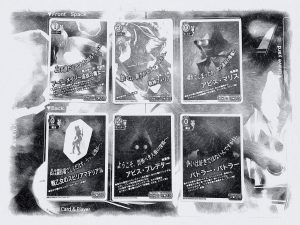 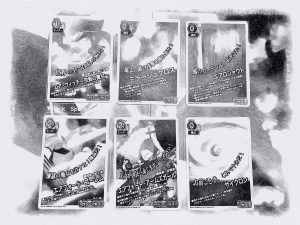 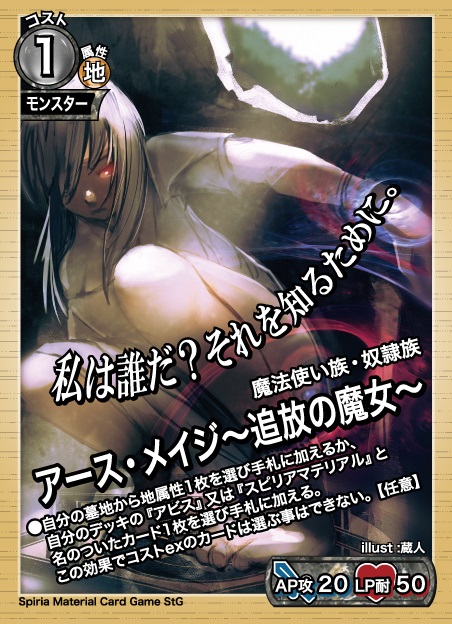 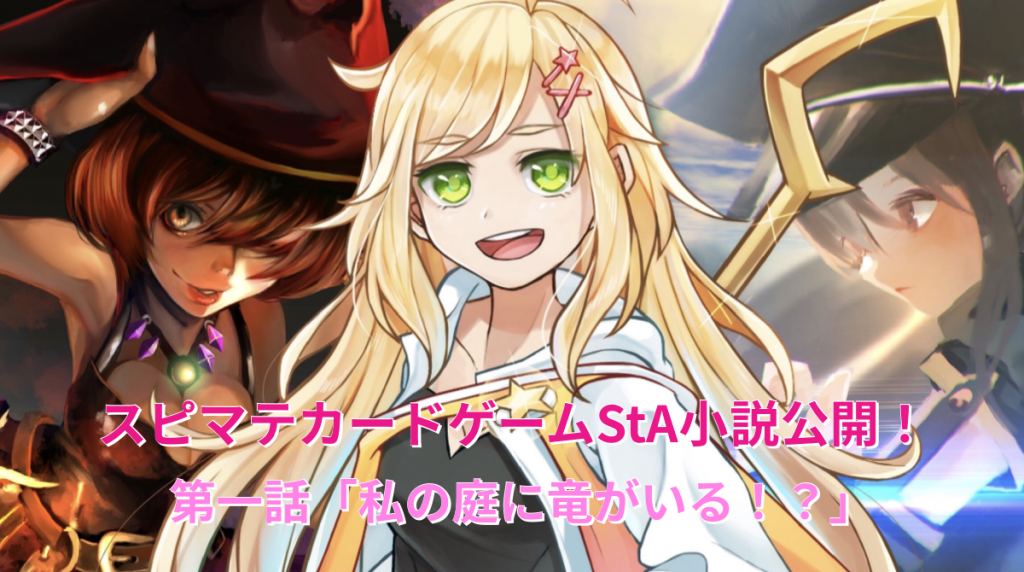 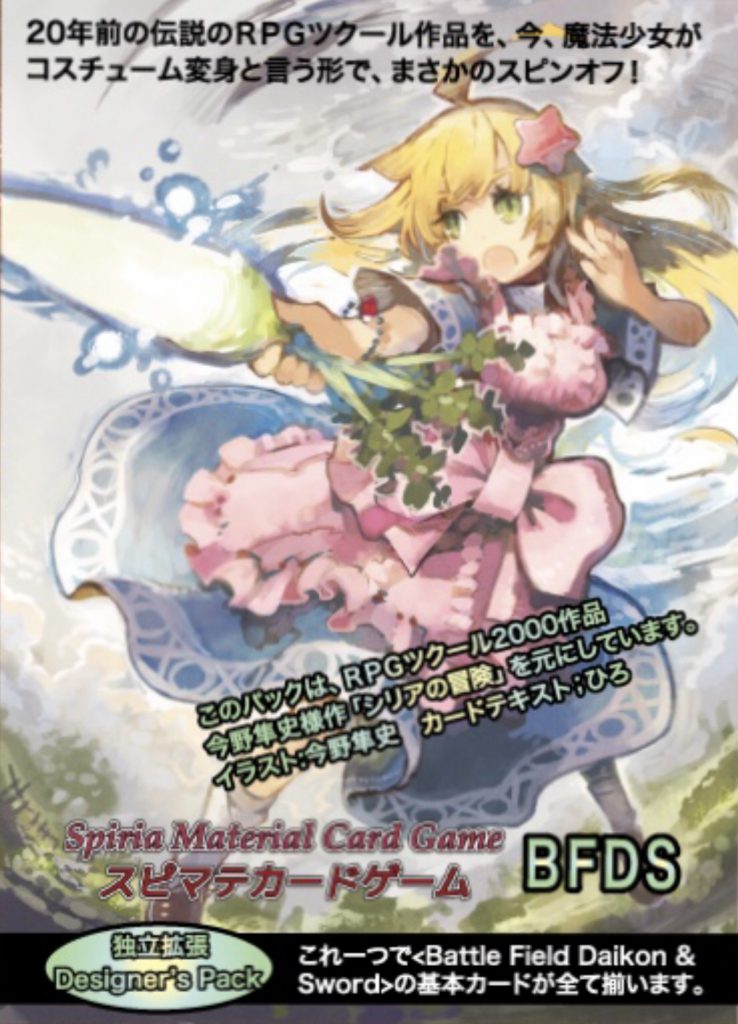 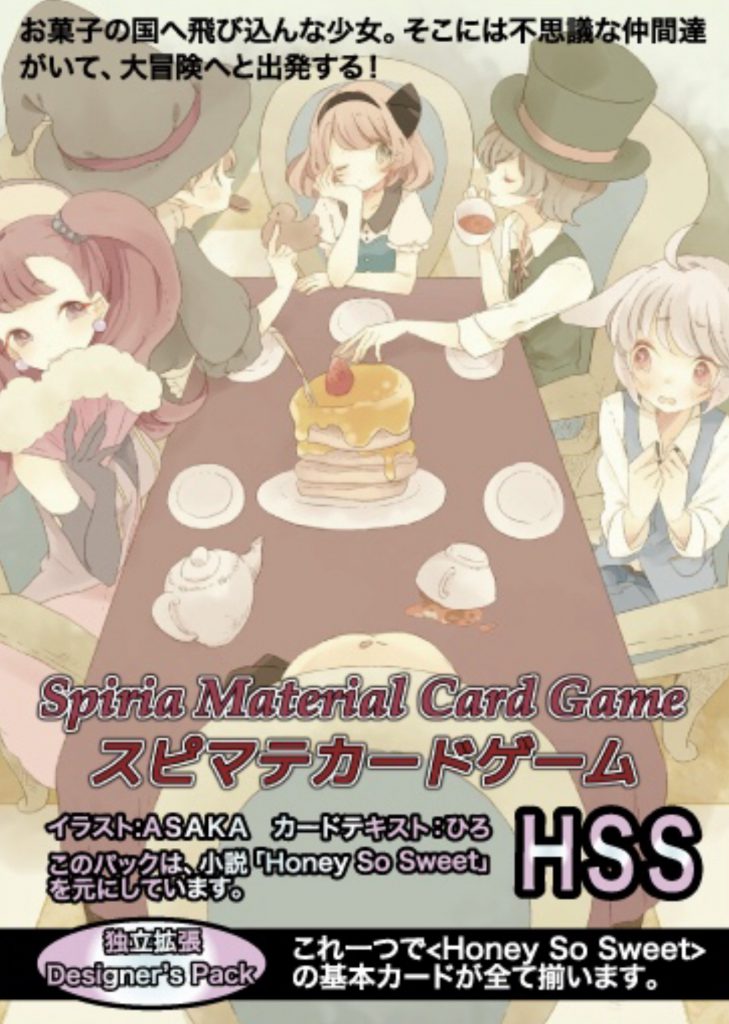